Thanks to Mr. Jeff Garter’s efforts by TLC, we could hear the story of ARRO, CURB, FLYWHELL in order. Since TLC is also taking measures against Uber, and it is aggressive in dispatch applications, it probably cooperated with us this time.

◎ARRO
We introduced companies participating from Japan. We also introduced Japanese dispatch application.
Since people with decision-making authority are participating, it has extended to concrete talk about business alliance concerning dispatch application.Regarding ARRO, which is a dispatch application, the president of CMT (Creative Mobile Technology), a payment system company, who is an investor, came. He was thinking about entering Japan, he says he will respond if it ties only with ARRO. In the discussion, confusion between the story of the payment system and the dispatch system was seen. If it is said that the dispatch application between Japan and the United States will tie up, the news is great.To the president of CMT, there was a talk of affiliation between ARRO and CURB in the news, but I asked if it is true. Although it was a reply that there was no affiliation of dispatch application, it was reply that there is a tie-up of the settlement system.
The following picture is a coincidence that I found by chance during the trip and is a picture of the yellow cab that ARRO can use. An indication of an available card is also given out.

◎ CURB
The parent company VERIFONE of CURB is a large company and has advanced all over the world including Japan. Today ‘s explanation was also done by employees of VERIFONE. Again, confusion between the settlement system and the dispatch system was seen. As for the dispatch system, E-CURB has advanced to France, which means that it becomes a sample in Japan. If you partner with CURB, there is a possibility that it will be swallowed if the Japanese side is small. Applications with few downloads and low utilization are blown away.
In Japan, as a result of labeling Uber equal illegal, the delivery application itself was Uber and it was decided to be ride sharing.Since dispatch prime is important as a future strategy, we can not deny it. Ride sharing is also highly public and must be promoted rather.On the other hand, illegal business is a violation, and in New York Uber and Lyft are operating with licensing. In Japan, sales in the garage due to the fixed fare and street-hiring by the meter are under the same regulation. Therefore, it is hard to understand the system of the United States and the UK which separate the two.

We asked if we tied up with CURB, what is the fee? However, that reply can not be unconditionally determined. It is true that you can not decide that you do not know the scale.It seems that the talks in Mexico are about 10%. Uber also has advanced to Mexico.Since it is not limited to the dispatch tie-up, if we tie up, there is the possibility that we will be swallowed. VERIFONE dispatch application staff said that when considering securing income of taxi drivers, we thought that we should consider various devices such as luggage applications.Advertisements will be similar as well. In terms of recognizing that we should consider it as a comprehensive mobile lifestyle industry, it is not a defensive attitude. Japanese taxi operators are sorry for being too regulated.

◎ FLYWHEEL
We met with FLYWHEEL at the telephone conference. TLC staff set up the screen. In the description of FLYWHEEL, taxis are the only fields that are not digitized. If the mobile terminal of the electronic meter function developed by FLYWHEEL gets into the system, it can be digitized.It also leads to management improvement. Applications on the back end can also be brought online, and it will become clear on the web. Uber and Grab use FLYWHEEL’s goods.They are encouraging New York City to be recognized as a taxi meter of the Measurement Law. Although the verification experiment seems to have ended, TLC has not admitted yet.Only 5 thousand units on the West Coast of the USA are allowed. In order to secure the accuracy of distance measurement of 99.99%, in addition to GPS, accelerator, Google map etc are combined. You can not do it unless it is connected with Google’s API. The accuracy of time measurement should be the same as before. DeNA of Japan is contributing. Google seemed to be expecting though it was still. For mobile terminals, it is now an android due to the large number of androids in taxi drivers, but it is not limited. FLYWHEEL hands the product of FLYWHEEL to the driver. That is because the regulation is less troublesome. Data transmission uses Bluetooth.

◎ Hearing to the driver of Uber and Lyft

Driver’s working hours limit was limited to 12 hours a day, not only by Uber and Lyft drivers, but by all drivers including break time. There is no distinction between sales and private use for safety regulations. A rumor occurred that New Jersey police were severe with Uber’s driver. Therefore, some drivers were scared. There is no such thing now. As for Uber, there is no case that customers can not be found on the way back from the airport. Return is nearly full.
Regarding Uberpool, they are triggering a driver with the first bonus $500.It seems that mostly two or more customers ride. I also saw Uberpool in App in New York. It seemed to be specifying the meeting place. Although I have not actually tried it, I could confirm that it is functioning. In Japan, regarding sharing acts, taxi companies directly do it, they are in violation. It is necessary to do as a product of travel industry.In New York, unless it is done as street-hiring, special procedures are not required. This is different from Japan.There was also an opinion that the merit of being able to work freely also depends on how incentives are given in the end, so it seems to be free and not free. That would be the case.The driver’s story has been minimized as it is reported collectively by the team next secretariat. 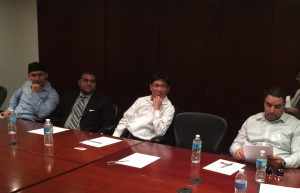 I headed to Accra from Lagos. The Africa World Ai