In Addison Lee Corp. we got the explanation from MS. Catherine Faiers, COO.

Addison Lee is a company that John Griffin has started from one in 1975.
The company has become larger through the acquisition of other companies.
When the number of dispatch has become two thousand units, company logo has been unified into the current one.

Currently it is a scale to dispatch a 4500 units.
Carlyle Group acquired Addison Lee Corporation for overseas expansion in 2013, in 2014 it was expanded into New York.
The company believes the Asia expansion in the future.

If Japan’s taxi management to visit, than the black cab is a private taxi, it is better that you visit the minicab company.

Minicab is to rent a car to the driver, to teach driving skills, is to arrange the user in making full use of the dispatch app phone and computer.

Although not in the form to hire a driver such as Japan, economic and social function of minicab is almost the same as Japan’s taxi company.

Especially international expansion that made full use of smart phones, Japan’s taxi companies should emulate.

In the future of international tourism market, Japan taxi companies will be left behind 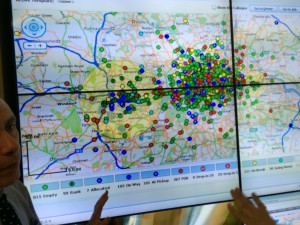 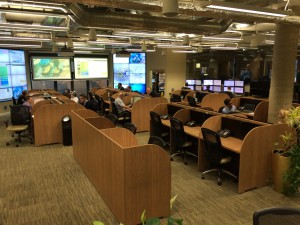 Addison Lee Corporation is a large company that dispatch 8 million times a year.

There are 300 people in the call center.Percentage of dispatch is, from 40% of call center, 20% from the personal computer, is 40% from the smartphone.

Dispatch of the algorithm are in favor of the enterprise.A human-made directly is about 1%.And are reflected in the algorithm by its after rework. 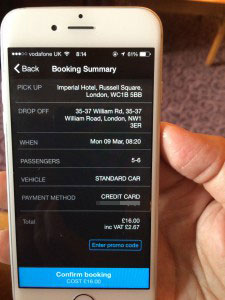 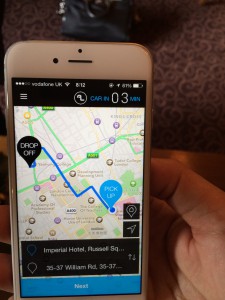 As also in the photograph, even though operating flow has not been recognized, the vehicle is located in London throughout.
It is waiting at the taxi stand called RANK.

Rate to the destination is determined from where the customer ride at the time of receiving the dispatch.
This is also many benefits for the customer, can be said that modern management
(Rates in some cases time system in the contract with the enterprise customers are determined in advance).
Japan’s taxi business is also the point should emulate.

The driver is a sole proprietorship, the company has been taught the opportunity of skills in hand operation.

In the case of enterprise, is better that you can reach the destination without using the Navi, the better the impression of customers.

In the driver training institutions, quarter to pass.
Failure who have one receives the test is re-trained.
When the test, the driver learn English and geography knowledge and customer service.

Annual income of driver is not bad in the year 30,000 pounds.
Foreigners is 80%. Women not almost.
The average age is 46 years old.
It is a city force of London accepted foreign workers.
In the case of Tokyo might become stuck in Japanese issues.

70% from 60% of the fare revenues is a share of the driver.
Driver to bear the gasoline.
Car is a private car, driver go by as it is riding to home.

And is contracted with 270 companies are cheaper about 30% compared with the fare general customers.

It should be noted, is written in the body of Addison Lee “We also deliver people” is a very idea of human logistics.