Headquarters of Hailo is located in the general office of Somerset House, is a IT company itself.
Dispatch situation is also only in the personal computer screen, is a sight that can be subjected to feel like have implemented the third-party business of just human logistics. 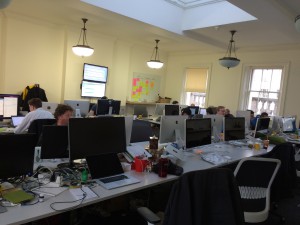 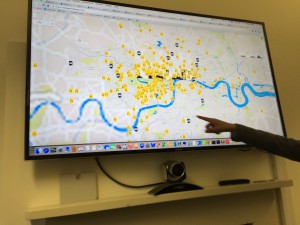 Near the resting place such as gas stations adjacent black cab, Hailo is provided with a field office.
It is attentive to the driver of the black cab is a customer for Hailo. 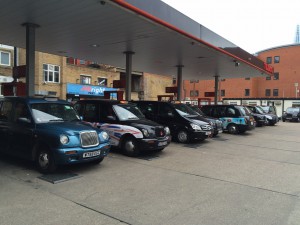 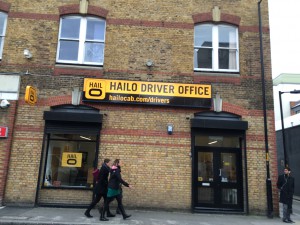 550,000 customers have registered.
As a result, has been dispatch one day 10 000 times in London. Fare per time is about an average of 16 pounds.
Hailo has taken only operating costs as a dispatch fee, you have got a 5-20% from fare.
Average arrival time is 3 minutes.

When Hailo has spread the business to PHV, misunderstanding of the black cab driver was born friction occurs.However, there is also the efforts of three founders driver, have been obtained the now understood in.

Confusion, such such that the news as Uber did not occur.
In RUSSELL’s story is one of the drivers-born founder, it is that it’s to have been holding such dispatch concept 20 years ago, people were thinking the same kind of vision and I looking in the world it is where you feel even I as there. When the time of congestion, such as black cab can not dispatch, is performed dispatch from PHV enterprise, hailo is getting the end user trust.

However counts cooperation performance of isochronous congestion incorporates an algorithm to increase the priority of the next time shift (36 hours). Wait 2.5 minutes in the pickup point rule (Osaka 5 minutes) is. Congestion information is the Toko and not the special allowance in the application stage because already standard on map information such as google.

Black cab is center cash business has been accepted as a matter of course in the sink, is supposed to slide into fewer categories of things that do not flow with the flow spread of app dispatch is, in the business category, such as up to now also black cab driver might be enacted not. Since the customer is picked up by flow has introduced a system to pay admits at Hailo if desired registered members Hailo, it is limiting but has come to the credit payment may be required.

I slide into strengthening also respond to B2B as now Addison Lee as Hailo. Register for corporate credit card, and corresponds to allow tightening of the month. Smartphone is can be booked from the PC as well, you are conscious quick note to also leave as at the time of booking. Multiple simultaneous dispatch system not possible with current Sumaho also has developed, it is that the it is possible to charge the hotel side reserves the hotel side. When the algorithm of this per will be developed, will future travel products also becomes possible. Previously that end up with this, it is also a pleasure even as whether I personally there is a flat-rate unlimited ride model.

The correspondence of the time of the most congested in this London visit I realized that it is not a problem of dispatch app. This time it would be a cold, can not participate in the food dinner with a Hailo · CEO that had been scheduled for after the Prime Minister’s Office visited Ronald (cover photo left of person), but is was asked separately dispatch, road closures is sometimes suddenly it occurs, even in private cars of dispatch of enterprise, you’ve significantly delayed. Such a time corresponding to the customer is important copper ringing is whether such information provided, if what extent delayed whether is provided neatly trust it is up to you felt would not be lost.

◎ Taxi & Limousine Commission  In the morning, we