With Lyft’s official launch in New York City this week, Uber may have a lot more to worry about.
What initially made Lyft a great competitor to the transport giant was the contrast in the two services’ respective models. Uber’s ride-sharing model is centered around professionally licensed drivers, which is what allowed it to thrive in the good graces of the NYC Taxi and Limousine Commission. (Lyft suffered delays because of its failure to comply with regulations.) Lyft’s traditional model allows anyone willing to submit to a background check to be a driver, sans the $5,000 up-front fee. This true peer-to-peer function is what makes Lyft so different from (and a major contender to) the Uber business. At least that’s what makes it different from Uber in every other city besides the Big Apple.
But on Friday evening, the popular ride-sharing service officially hit the streets in all five boroughs of New York City. The catch? Due to a legal controversy, Lyft no longer offers that true ride-sharing perk in the city, the one function that is fundamental to its traditional model and, arguably, what made it an attractive competitor to Uber in the first place. Lyft has, instead, agreed to only use TLC-licensed drivers.
So in striking a deal with the TLC for the sake of operating in New York City and gaining a potential 8 million users, Lyft cut out the one feature that distinguishes it from its fellow ride-sharing peers, particularly from Uber whose presence in New York City is primarily rivaled by the NYC taxi market. Lyft, however, has commented that the elimination of its sharing function is temporary until it can work with the TLC to resurrect its original model. When asked on “Squawk on the Street” whether Lyft could possibly revert to its ride-sharing model, NYC TLC CEO and Chair Meera Joshi responded any that company “could always come to [the TLC] with suggestions … and we are always open to new ideas.” But she added that the TLC will “maintain what we’ve maintained from the beginning—we can’t degrade our standards.”

The Lyft app is demonstrated on an Apple iPhone 5s.
The implications of Lyft’s sacrifice for the sake of its launch are twofold: one, Lyft is essentially an Uber equivalent and will compete as such, with city-licensed drivers and a new black car base. In other words, Lyft is now less like Lyft. The second is that the two ride-sharing services must now solely compete in a pricing war (and no longer on the facets of their operating models).
It all boils down to simple economics. Price cuts and incentives aside, demand for Uber’s services should, theoretically, decrease with the introduction of a new player in New York’s transportation market. Which is exactly why the company has been jumping at the chance to lure potential users by dramatically reducing fares and commissions, especially in cities in which Lyft is also present. Moves include slashing prices, offering Lyft drivers cash bonuses for switching over to Uber and, in some cases, reducing commissions by 20 percent for its UberX service (like it did preceding Lyft’s NYC launch).
And Lyft is no different. Shortly after its NYC “Lyft-off,” the ride-sharing platform offered 50 free rides to several very happy New Yorkers via email and Twitter.
One might argue that the demand for viable transportation alternatives, particularly in a city like New York, will always be there for these respective car-for-hire networks and will, thus, cause lower prices. On the other hand, it could also be argued the inverse is true, that the low prices are the factors causing the rise in demand for these ride-sharing services. Cutting prices may be a necessity not only to compete with a fellow ride-sharing competitor (like in the price battle between Lyft and Uber) but may also be crucial in retaining the overall demand for ride-sharing or car-for-hire services. Living in New York is accompanied with several benefits, one of which is an affordable and reliable public transit system. In short, if Uber keeps its prices too high, it not only risks losing customers to other ride-sharing platforms such as Lyft but to the broader transit market, including—but not limited to—NYC’s taxi base. But too low and Uber loses more than it takes in. The same is true for Lyft and any other ride-sharing company that enters the market.
The two services don’t seem to be in danger anytime soon. Uber has been valued as high as $17 billion after its previous round of funding during which it raised $1.2 billion. Lyft has been valued as high as $700 million. Lyft is present in more than 60 cities across the nation with Uber operating in more than 100 cities globally.
With a constant stream of funding, particularly for Uber, and attractive valuations as a result, the two transportation services can afford to cut prices in order to compete directly with one other. In some ways, they have to, especially in New York City where Lyft and Uber are now perfect substitutes. But the problem is in the long run. And here we circle back to simple economics. You can only cut prices so much. And you can only offset your losses with funding for so long.
—By CNBC’s Emily Caruthers.

Lyft was launched in the summer of 2012 by Logan Green and John Zimmer as a service of Zimride, a ridesharing company the two founded in 2007. Zimride focused on ridesharing for longer trips, often between cities, and linked drivers and passengers through the Facebook Connect application. Zimride eventually became the largest rideshare program in the United States (U.S.).
Lyft launched as an on-demand ridesharing network for shorter trips within cities. Similar to Zimride, the app connects drivers with cars to passengers that need rides. Drivers and passengers rate each other on a five-star scale after each ride, and the ratings establish the reputations of both drivers and passengers within the network.
Due to regulatory hurdles in New York City, the company eventually decided to significantly alter its business model to establish Lyft on the East Coast. Lyft’s launch in New York City occurred on the evening of July 25, 2014 and, in accordance with the Taxi and Limousine Commission (TLC) and the approval of the Manhattan Supreme Court, only drivers registered with the TLC were permitted to drive Lyft-branded vehicles in New York City. Instead of Lyft’s signature pink mustaches, Lyft drivers in New York City sported a smaller pink mustache on their dashboards, which eventually evolved into the “glowstache,” the company’s current icon on its cars. 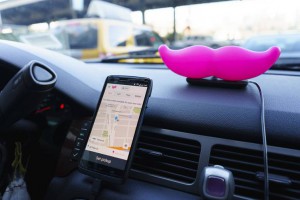