We gathered at Narita Airport. It is departure at 11 o’clock and it is necessary to check in 2 hours in advance. Because 9 o’clock is the meeting time, I left the house at 7 o’clock.

For me, this time visit to NY is the 4th time in 20 years. Although it has been experienced that security becomes stricter since 9.11, it is the first time that ESTA is needed.  ESTA is also convenient to acquire from the net and it is convenient to get used to it as it can be processed by machine when entering the United States.
Electronic registration for entry and departure procedures in Japan was invalidated when I updated my passport. It was finally possible to register again. It seems funny what you must apply for on paper for electronic procedures. Also, this registration only accepts hours during the day. Last time it was a late night flight from Haneda, it was finally done this time.
The immigration procedure to the United States was unexpectedly simple, it was only photographs and fingerprint registrations carried out in any country. It is probably because registration by ESTA is done in advance.
If the fingerprint registration is done, machine authentication will be required from then on. Besides, it is convenient because the Japanese version is installed on the machine.
At Nassau, certification could be done before entering the United States. I heard that it is the same in Canada. The United States will still have the power to build up the system. In Japan, we do fine-tuning the manual work, so the necessity is lowered accordingly. It is sarcastic.
The Government of Japan has set a goal to make the number of visitors to 40 million, but in reality, there is no choice but to expect an increase in travelers from China, Taiwan, Hong Kong and others. As in the immigration procedure between the United States of America and Canada, which has more than 20 million people, the Japanese airport will be very crowded unless it is made to allow entry procedures in China on the continent. However, it is doubtful whether Japan’s immigration authorities taking a cautious attitude on visa problems can set out a policy to admit it.

◎End of daylight saving time
Daylight saving time is over on November 6th, so I received attention from the local guide to watch out. Perhaps because of experience so far, travel agencies have experienced many troubles. It is a big uproar when the meeting time etc is shifted for one hour though.

◎ WIFI
While traveling overseas, I will turn off smartphone data communication and save money. The opportunity to utilize FREE WIFI has increased. Besides, because the team next office is bringing a portable router, it is convenient when you are near the secretariat. In New York, data communication is free in the subway premises, various streets and some parks.
The accommodation at Holiday Inn 57th is a non-smoking room. If you smoke in the room, you will be charged a cleaning fee of $ 250. That note was placed on the table. It was the same indication at the hotel in Cuba, so this might be an international way. A metal soap rest is in the bathtub. There is a danger of injuries because you take a bath naked. Someone will experience. There is also the possibility of claiming.

◎Uber’s greetings
We arrived at the JFK airport at 10 o’clock. On the way, Mr. Kanehara, former chairman of team next, found Uber’s “job advertisement billboard” that he found out in New York last time. We had sightseeing around the city by bus, with lunch in between until check-in. It is a good idea to eliminate jet lag. Uber’s advertisement is a driver recruitment advertisement. I think this picture is hard to understand, but I will post it for the time being.

Actually Uber’s propaganda was more advanced. Inside American Airlines flight from Miami to Mexico City, I was shown Uber’s propaganda on display before takeoff. Uber also has advanced into Mexico. On my way back in Mexico, a few Ubers were waiting around the hotel I stayed. In addition, because Uber advertised that it is entering the big cities of the world, I think that somehow Tokyo is left behind.

Greencab
Except for the center of Manhattan, in New York it is a shortage of taxis that can street-hiring chronically. To solve the shortage, thousands of green cabs were newly introduced. The street-hiring green cab was well visible near the airport. 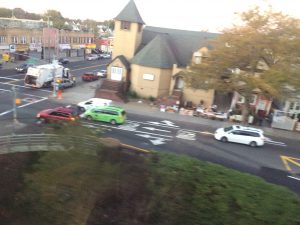 In the story of the guide, it was said that the medallion of yellow cab was 70 million yen so it fell a little. In my preliminary survey, the price was 100 million yen. It seems that most of the drivers have settlement rights from foreign countries. It seems that there were many Bangladesh in FACTBOOK in New York City (also described in my blog).
From the train window, we saw the airborne promenade near meat packing. It is a new tourism resource. The idea to utilize the waste railway of freight railroads is hard to imagine.

The city was also under construction at every part of the road congestion. Even in the case of building a private building, the guide was angry about using public roads as a problem. Perhaps, without construction, the number of cars will increase accordingly, and congestion will not change. Even so, I did not experience the crowding of Tokyo cars, so it was a long experience.

I took off Addis Ababa, flew over Somalia, and ar