We went to the New York Times. In the New York Times, the advertising department person responded. We were surprised because coffee and fruit were prepared in the room. People of the New York Times were full of expectations that we would bring business opportunities from Japan hosting the Olympic Games in 2020. The arrangement feeling of JTB was good. Michael Smith, an interpreter, has a mother who is Japanese. He is bilingual who lived in Kobe as a high school student. It is a skilled skill that he also interpreted Clinton and Trump. Even listening to an interpreter, I was surprised at the ability to understand and explain the contents more than the speaker. After all, his relationship with JTB will be long. When I asked Mr. Michael about the impression of using Human Logistics as a translation of “人流”, it was said that it feels human trafficking feeling. It is because there is a word of Human trafficking. He says that Logistics for Human is better. It was helpful.
It is a fact known in Japan that the New York Times is a quarity paper and there are many social influential readers. It is the same as the Asahi Shimbun. It seems that annual subscription fee is 100,000 yen (thousand dollars), and there are 300,000 subscribers. Although it is calculated sales revenue of 30 billion yen, advertising revenue will be large. Since it is the Internet age, they said that they are considering new advertising revenues. They collaborated with Google to collaborate articles and advertisements, they explained. We showed the application of VR. Unfortunately, my smartphone was an i-phone so I could not use it. Opinions were exchanged on the theme of how to sell Japanese tourism to the world’s wealthy people for the Tokyo Olympic Games. It is unexpected development. Although Uber was talked about by saying that it was opposite, Airbnb is incorporating advertisement. They do not seem to oppose the sharing economy.

I went to the shop of CUPS near Times Square at lunch time. It is one of the all – you – can – drink coffee shop for the month. Although there seems to be a drinking-all-you-can-ask system at first, when asked, it was only those who paid individually. 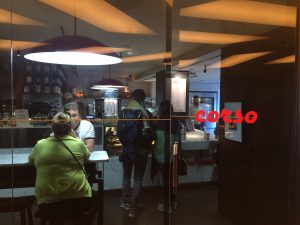 We visited Gray Line in the afternoon. HOP ON & OFF, sightseeing boats around Manhattan island, airport limousines and so on. They are also handling pickups at airports throughout the country. It is a company similar to “Hato bus” in Tokyo. The name of VELTRA came out. The fee is 20%. Because Uber is that much, it may be an international exchange rate. For those traveling from the United States to Japan, it became a question whether we can secure legs in Japan together. Advertisement of Lyft called “HOP TO IT” appeared in the company’s HOP ON & OFF brochure. It seems like you can get a $ 20 free ticket.

In the evening, we took a sightseeing bus “RIDE” recommended by Mr. Nozoe who developed a JERON taxi at JTB. Like the Superview Odoriko running by JR East Japan, it is a sightseeing bus that sets all the seats towards the left in the direction of travel so that you can enjoy the street performance on the road. The meeting place is 42 Th. There was a futuristic musical in the musical, but I understood the atmosphere in which the title was given. I could have enjoyed enough although the street performers could have been a little more. However, because it costs more than 10,000 yen, I can not participate many times. The customers were multinational with Australia, Italy, Chile, Japan and so on. 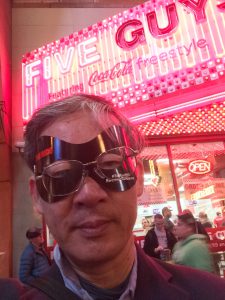