In about four hours, beyond the mountains, we arrived at the residence of Sherman. Чулууний who is the sherman let us drink milk tea of ​​reindeer, followed by round-table.Now, he has been the forest supervisor.In the socialist era, his wife seemed to have been a nurse. By democratization, 38 heads of reindeer were distributed, then that has continued to now of life. Two daughters got off the mountain, are living in the city. One of the daughters, by ethnic minority policy, are going to college. In the era when science,magic and religion were unseparated, people relied only in spirit. Now it is so different. Tsaatan ethnicity is about five hundred people. Family number is 50-60. For Sherman activities, I have continued until now of 47-year-old from 25 years old. First, although I want to fortune the family, I began to predict also others from the 32-year-old. At the time of the children, it was found the sherman of talent by the teacher. I, is 13 generations. Sherman, are two people in the other. Ritual of the way is the same.

Prices depend on humans. Heaven of soul comes to say the price.If you do not thank for the spirit, it will be harmful to the Sherman family. When the round-table is finished, at the stage to ask the sherman ritual, it became atmosphere of whether there is a misunderstanding in reward amount this remains return.After all, it was to be asked in the original condition (200,000 Tsuguru).Sherman couple also seemed relieved or no heart.

Around ten p.m., we went to the gel of sherman. Finally ritual begins. While photos of the ritual itself does not matter if you use, the use of the Internet is denied. So, I had been up a picture of the preparation. It is a reason that a lot of people are embarrassed to visit. The reason I did not understand. Drum for the ritual, are tinged with moisture, the sound was bad. It was decided to dry roasted with fire. With the smoke of dead pine needles, it had cleansed all of the “costume-tool”. Two guides, experience as an auxiliary role is rich, was accustomed to the ritual. 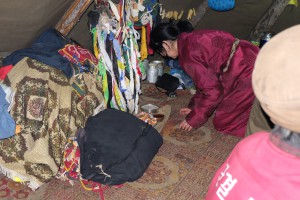 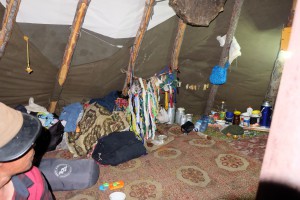 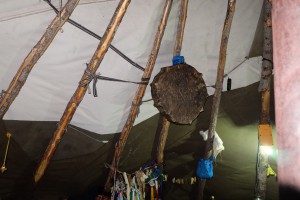 In the preparation stage, and was told to put out offerings of liquor, tobacco.However, since not heard, not those without.It was followed by silence than endure for a while. However, in the end, Sherman went out of the gel.After a while, he came back with a bottle of Aruhi of over drinking.Finally ritual begins. Sherman will hit the drums, wielding a white piece of cloth with the image of a feather of a bird that was attached to the back to the left, right, up, and down.He becomes increasingly euphoric state. While hiding the mouth in the drum, and start something emits words.We are called one by one person, listen to your told of Sherman.Divination of spirit, was conveyed to the interpreter from his wife.And it was told by the Japanese from the interpreter.To his wife from Sherman, directly, the voice of the Spirit is transmitted. Therefore, the wife is seen words of spirit.

“Going well all that you are thinking of you.” This was my fortune-telling. I thought it was clever wife.Including preparation time, ritual took about one hour and a half. Similar to the long reading aloud the sutra and chant by monks and Shinto priest it is hard work.